Our pick of the great biking trails that allow cyclists to appreciate the beautiful scenery of the city and surrounding region.

Wellington offers a number of great biking trails that allow cyclists to appreciate the beautiful scenery of the city and surrounding region.  The diverse range of bike trails include urban trails that traverse some of the city's most iconic spots, mountain bike parks and coastal trails.  We've picked out the best of the bunch in our Wellington Bike Trails Guide.

This is one of New Zealand's top trails and a must for biking enthusiasts.  The Remutaka Cycle Trail features four main sections and should take four days to ride.  From the beach at Petone, you'll ride alongside the Hutt River through Lower Hutt, and Upper Hutt, set amongst bush-clad hills.  You'll pass by some of New Zealand's most important cultural history along the way, including MÄori pa (fortified villages) and early European settlements.  An old rail trail leads you through the Remutaka Ranges and onto the rural roads of Wairarapa and boutique vineyards.  The final section leads you along the rugged South Coast, where mountains dive into the Pacific Ocean.

Length:  112.9km
Duration:  4 - 5 days
Start:  Petone Wharf on the Petone Esplanade. It ends at the mouth of the Orongorongo River on Wainuiomata Coast Road. 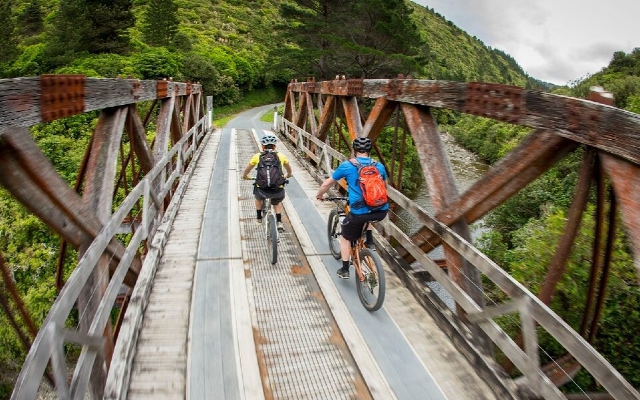 The Skyline Track is a ride along the highest ridgeline and peaks of Wellington, from Makara Peak, past Mount Kaukau to Johnsonville.  It's an ideal trail for bikers and walkers with many exit/entry points along so you don't have to do the full trail.   Along the way you'll encounter challenging steep terrain, but the panorama views across the Wellington region are a lovely distraction from the effort it takes.

Length:  12.9km
Duration:  5 hours
Start:  From Old Coach Road in Johnsonville until you reach the Makara Saddle in Karori.  It can be completed in both directions. 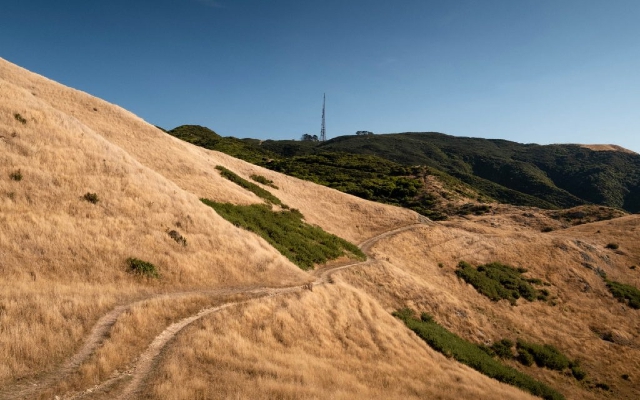 Makara Peak Mountain Bike Park offers 40 mountain biking trails to choose from set within 250 hectares of spectacular native bush.  Winding around Makara Peak, the bike park can be enjoyed by all biking skill levels.   The setting of the park gives beautiful views of Karori, central Wellington, and even as far as the South Island. 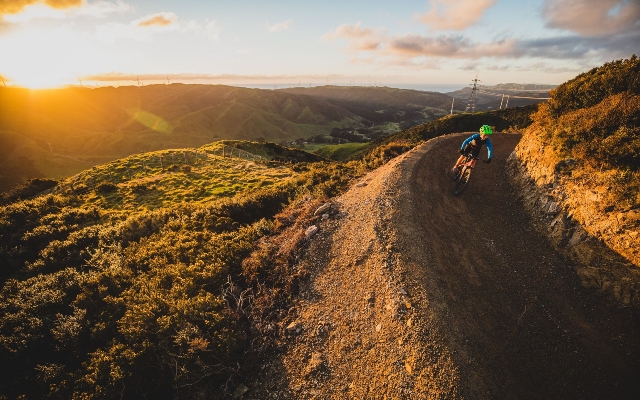 Popular with locals, the Southern Walkway starts from the beachside suburb of Oriental Parade and follows through some of the city's best loved parks and suburbs, until you reach Island Bay.  Along this picturesque route, you'll enjoy plenty of sights including panoramic views of the city from the top of Mt Victoria, famous Lord of the Rings movie locations and pass through suburbs on urban bush trails before reaching the South Coast.

Note: The northern section of this trail is for walkers only, but there are lots of mountain biking routes on Mount Victoria.

Length:  10.7km
Duration:  2 hours. (4-5 hours if walking)
Start:  If heading north to south, park at Oriental Parade or catch the bus to Courtenay Place (a few kms away). The trail is signposted near the intersection of Oriental Parade and Carlton Gore Road. The walkway ends at Shorland Park in Island Bay. 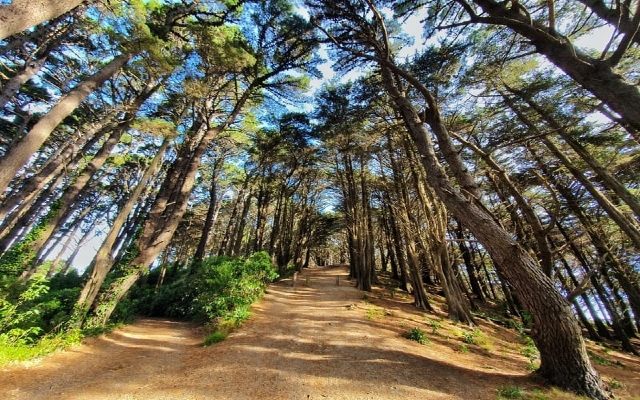 Enjoy bike and walking trails set amongst 110 hectares of former farmland regenerating into indigenous vegetation.  Te Ara a Rangituhi full of connecting trails through the Western Hills of Porirua. You'll ride and walk through lowland forest and take in spectacular views from the summit of Rangituhi, extending from the Kaikura Ranges to Mount Taranaki.  The reserve itself spans Titahi Bay in the north to Ohariu Valley in the south and is sandwiched between the Porirua Scenic Reserve and Colonial Knob Scenic Reserve.

There are multiple entry points: 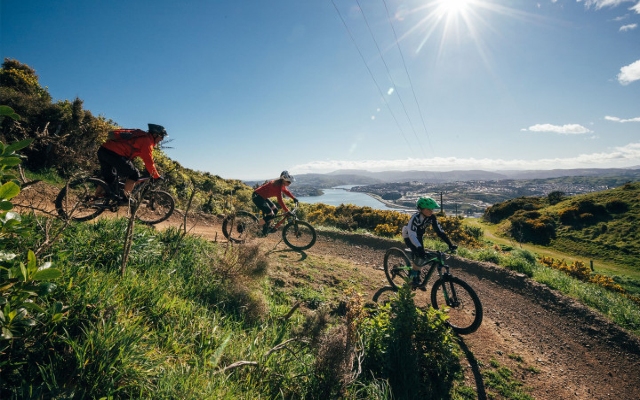 Situated at the foot of Mount Climie, the Tunnel Gully Recreation Area is named for its link with the historic Remutaka Railway between Wellington and the Wairarapa and features the 253m long Mangaroa Tunnel.  The uphill/downhill trails range from beginner advanced and includes some great views of the Hutt Valley, Wellington and the Wairarapa region.

Start:  Tunnel Gully car park is 10 located at the end of Plateau Road in Te Marua. 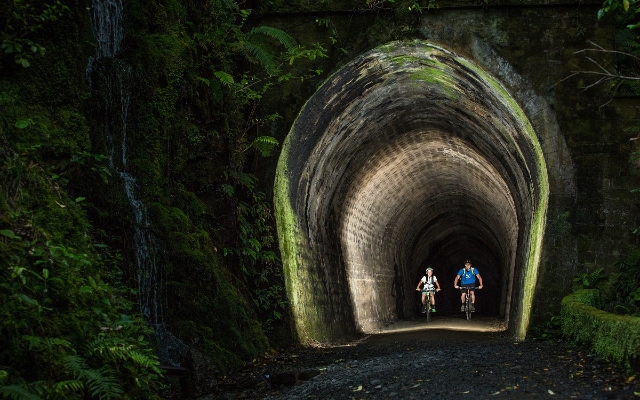 The WaiÅ« Mountain Bike Park features an expanding network of over 18 trails for riders.  Discover the wilderness of Wainuiomata as you wind through native bush and wetlands, crossing streams and taking in 360-degree views of the Hutt Valley and one of the very best views of Wellington itself.

There are Multiple entry points: 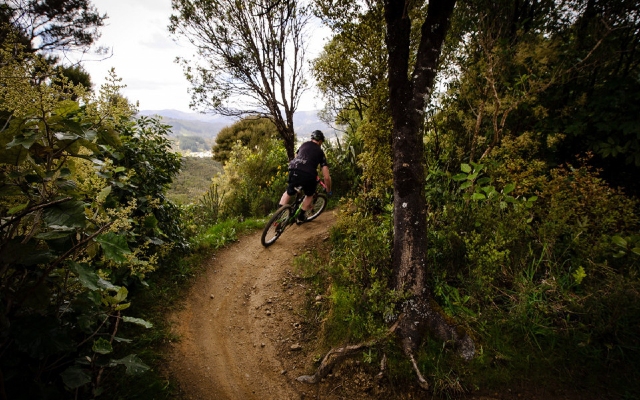 The Polhill Reserve features the full range of rides from full-day to shorter trails.  Biking along 4WD roads and narrow winding single tracks, you'll ride to the top of the Brooklyn Wind Turbine and then choose your trail.  Whizz back down to Aro Valley, or descend on down to Red Rocks on the rugged South Coast, via Te Kopahau Reserve. Here, enjoy views of the South Island and spot the local seal colonies.

Start:  The main entry is located on Aro Street. There is a second entry (via the Clinical trail) about 500m up Holloway Road. 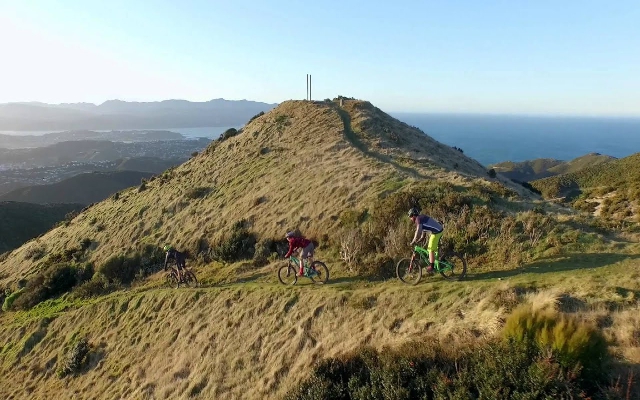