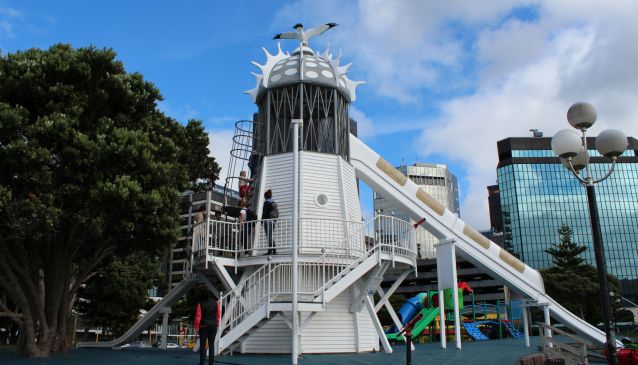 Frank Kitts Park is among the best known and best loved green spaces in central Wellington. The park is located in Jervois Quay on the waterfront and it is named after Wellington's longest serving Mayor Frank Kitts (1956-74).

The area is part of Wellington's waterfront walkway that stretches around the harbour and the distance covered by the Frank Kitts Park section is usually busy with locals enjoying the sunshine, eating lunch or getting some exercise during a work break.

The park itself includes a children's play area featuring a slide made from an old lighthouse, which is always popular with children.

Nearby attractions include Te Papa, the Wellington Museum of City and Sea, and the TSB Arena and the popular weekend Underground Market.

There are plenty of restaurants and cafes within walking distance of the park, and an ice cream van can often be found parked near the playground. The waterfront space can also be hired for outdoor events.